Editorial cartoonist Gary Varvel has been inspiring conversations around the country for years. He discovered his drawing talent in his teen years, and was further inspired when he met Jerry Barnett, editorial cartoonist for The Indianapolis News.

Later, Barnett served as a mentor to Varvel and recommended him for a position at the newspaper. In 1994, he became the editorial cartoonist for The Indianapolis Star, and his nationally syndicated work has been printed in Newsweek, The New York Times, The Washington Post, and USA Today, among other publications.

Varvel accepted Christ at the age of 12, but admits he went on a “spiritual starvation diet” during his high school years. Later, he returned to his faith when he married his high school sweetheart, Carol. He also remembers a distinct turning to God with the birth of his daughter, Ashley. “We wanted to raise her right,” says Varvel, and both he and his wife recommitted their lives to following God.

“I learned a lot when I was young because I had a good role model in my father,” Varvel notes. He knew that if he wanted to pass on his faith values, they would be “caught” more than “taught.” He fondly remembers his dad reading Scripture to him at bedtime, which became routine with his own three children.

Later in life, he found that Scripture memorization made one of the biggest impacts on his personal spiritual growth and his ability to share the gospel with others.

Varvel began working part-time as an art teacher at Bethseda Christian School in Brownsburg, Indiana while his children were attending, which gave him the opportunity to drive them to school. He says they took advantage of that time to memorize Scriptures, coming up with various ways to make it fun.

His award-winning cartoons have given him many opportunities to make an impact. After 9/11, Varvel drew a cartoon of a tearful Uncle Sam carrying a fallen firefighter from the rubble. Prints were made and sold, raising $130,000 to support the relief efforts. 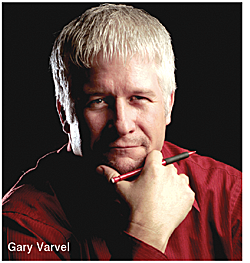 Varvel also watches for opportunities to share his views and faith in smaller settings. “In the office, I try to be loving to everybody,” he offers. At one point his reputation earned him the nickname, “The Bible Answer Man,” since reporters knew they could count on him if they were doing research for a story that required biblical knowledge. Various mentoring conversations have also turned out to be great opportunities to share the gospel as he tells younger artists his story.

He has also discovered the importance of meeting people where they are when sharing Christ with them. “You want to shine light in their life, but you don’t want to stick a flashlight in their eyes. I don’t see that Jesus forced himself on people. He just gave them truth.”

Varvel’s latest passion has allowed him to combine his love for Jesus, family, and creative work to produce the full-length movie, “The War Within,” through nonprofit House of Grace films. In 2007, he helped his son Brett produce the movie, “The Board,” with minimal funding. The short movie, which shared the gospel, ended up going worldwide.

Varvel, his family members, and other talented associates are working hard to release the new film in 2013 in hopes that it will capture the hearts of those seeking God. Learn more about both films at www.houseofgracefilms.org or view Varvel’s ongoing work at www.garyvarvel.com.

Previous StoryRemember!
Next StoryTwelve for 2012: Twelve Ways to Express Thanks with Pizzazz