Wayne Foster, CEO of American Patriot Getaways in Pigeon Forge, Tennessee, and The Systems Specialist in Owensboro, Kentucky, says his story of coming to faith in Christ isn’t nearly as dramatic as some.

His father was a deacon in their church and Foster recalls that they were “at church every time the door was open.” He was about 7 years old when he made a lifelong commitment to Jesus Christ and was baptized in his grandfather’s pond. Since that time, God has given him a multitude of opportunities for which he is grateful.

He says the first real challenge to his faith came in early adulthood. He was married with four small children and serving in the U.S. Air Force when he came home to a “Dear John” letter. He remembers wondering for the first time if God had deserted him. He began thinking that perhaps bad things really do happen to good people.

It was a challenging time, during which he decided to “swear off women.” That is, until he met Kathy, a young woman working for a company where Foster was doing consulting. Now, in addition to being married for almost 40 years, Wayne and Kathy have been partners in various businesses for decades.

“She is an amazing woman,” says Foster, who notes that he never would have made it this far without her. “When we first got married, we didn’t have anything. I couldn’t afford to get the reverse gear in my car fixed. I had to watch where I parked.” Over the years, Wayne and Kathy have grown their businesses and their faith. 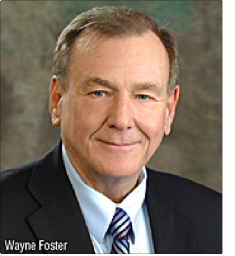 “We basically have three areas to our lives,” says Foster. “You have personal, church, and business. I believe the rules—the way God intends for us to behave—are the same in all three areas. If a rule is good enough for church, it’s good enough for business. We treat all three the same, and that carries not only to our businesses, but also to our employees, vendors, and customers. We will follow biblical principles. Are we perfect? No. We are human. But we teach all our managers to operate in the same mode.”

The Fosters have also been able to help some employees who serve on their reservation lines at American Patriot Getaways. “We employ a lot of single women, many with children,” says Foster. “Some of these women have struggled with finances. Kathy has ministered to them and helped them understand how to manage their money better.” Using Christian financial principles, Kathy helped the women get a new perspective and some of them started attending church with their families.

“My belief is that sometimes in business we forget how influential we can be. Little things make a difference. I don’t think it’s the big stuff. People are watching how you treat your employees and how you lead your organizations. What example are you setting? You don’t have to wear a big placard on your back that says you’re a great Christian. If I live the way Jesus wants us to live as Christians, I don’t need to wear a sign.”

The Fosters’ faith in God has helped them through hard times and a tough economy. “We don’t stress out. It comes back to faith. Kathy and I came to the conclusion a long time ago that these are not our businesses; they are God’s and are to be used for him. We’ve always tried to adhere to that. Sometimes that means we pray, ‘Lord, your businesses are in trouble.’ We refuse to stress out over things that seem to be going poorly. His plan is so much bigger than my plan. I’ve quit trying to micromanage for him.”

Foster says no matter where we are, we all have challenges. “Instead of worrying about a $200 bill, I may be worrying about paying a $2 million bill,” he chuckles. “God will give you what you need to get through any situation. I have to think, Can I really turn it over to my heavenly Father, or am I going to try to do it myself? God taught me a long time ago; I’m not in charge.

“It boggles my mind how great our God is. Here is the real issue: Are my problems bigger than my God? Never.”