What It Means to Be a Mother

What pictures come to mind when you think about your mother or other mothers you have known?

Some may compare their mothers to the Proverbs 31 woman. They commend their moms for devotion to family, their work ethic, their encouragement, and their love for God. They may think about a faithful woman who persevered through trials and challenges. They have a positive model to emulate when the hardships of life come.

Others are not so blessed. Their mother picture may be empty. Some may have suffered the loss of a mother and have never known a mother’s loving touch, kind voice, or caring support. Perhaps there was no other to stand in her place. The absence of a mother, by choice or circumstance, extracts a heavy price from children who need family connections. For many, this loss is not easily forgotten and continues to impact them when they become parents.

In the absence of a positive role model, how can a woman become the kind of mother who honors the Lord? She can start with the Word of God. The Bible provides many positive examples of godly mothers.

Models from the Old Testament

Hannah longed for a child (1 Samuel 1, 2). She was one of two wives in a polygamous marriage. Being the wife her husband favored did not prevent her from being the target of the wife who was able to bear children. Scripture pointedly says, “Her rival kept provoking her in order to irritate her” (1:6). Oh, the trying days Hannah must have endured.

It is all the more amazing to see the humble spirit with which Hannah kept her head, shared her heart, and bared her soul to God as she prayed for a child. Only God knew the trials she faced. Only he could see the loneliness of her yearning and answer her prayer, resolve her situation, and bring peace and fulfillment. Elkanah’s favoritism could not make up for her loss. Only God could give her true joy. And he did.

As brief as it is, the book of Ruth records the name and actions of Naomi in each of its four chapters. Early in the first chapter, she stands alone. Her sons and husband have died. She could have lived in bitterness because of the famine that forced them to move to a foreign country, or because she was forced to return home without her husband and sons. Life had certainly taken its toll on her.

But her pioneering spirit, endurance, and love compelled one of her daughters-in-law to refuse to leave her. No doubt Naomi’s example affected Ruth’s outlook on life. And the grandson that blessed Naomi put her family in the lineage of King David. Not a bad record, to say the least.

Models from the New Testament

Lois and Eunice, grandmother and mother of Paul’s protégé and disciple, Timothy, epitomize the interconnectedness of godly family relationships. We first meet Timothy in Acts 16 where he is identified as the son of a Greek father and Jewish mother. He was a disciple, spoken well of by other Christians. He knew about the trials, sufferings, and persecutions the preacher Paul had endured, and he willingly became a partner in his work.

Paul saw in Timothy the same faith he had seen in these women (2 Timothy 1:5). When Lois and Eunice embraced the truth of the gospel, their lives and faith were reflected in the child who obviously honored and followed their life-changing decisions. Their lives of faith speak to the influence of godly mothers and grandmothers, reaching not only future generations within the family, but outside the family as well, strengthening, inspiring, and encouraging other Christian workers

We first learn about Elizabeth (Luke 1) from the narrative about her husband, a priest, serving in the temple. The Scripture does not say this, but we wonder if part of his prayer while conducting his priestly duties had to do with their childlessness. The angel who appeared to him acknowledged that his prayer had been heard (Luke 1:13). This elderly couple had given up hope for a child.

But God’s blessings do not come out of time. Elizabeth graciously delighted in the Lord’s special favor to her at her stage of life. She became a mother, her son was given the name John, and their family became the talk of the town. What an unexpected surprise John was for his parents! What a marvel he created for the neighbors who could only guess that God had something special in mind for this young man. John became the messenger who helped open people’s hearts and minds to hear Jesus’ teachings.

Just when we think the story can get no better, enter Mary, who has news of her own. But as it happens, Elizabeth already knew! She spilled over with blessings on the young expectant mother of the Christ child. The contrast is notable—the older and younger mothers-to-be sharing their anticipated joys of motherhood, in awe of God’s purposes for mankind as he honors them in their special roles.

Let’s not forget to note Elizabeth’s understanding and compassion that would have eased some of the nervousness Mary may have felt. Elizabeth was older than most mothers, but her age did not keep her from expecting the unexpected, from being open to what God could do in any situation, and from being an encouragement and strength to others when she herself may have felt in such need.

Expectations for mothers can be tricky. Sometimes mothers try to fit what they think others expect; sometimes they put unreasonable expectations on themselves. But when we look at the examples of mothers in the Bible, we discover a basic truth: What makes a mother godly is her surrender to the Lord and keeping faith despite trials and trying circumstances.

Paul instructed Timothy, “Teach the older women to be reverent in the way they live . . . to teach what is good” and to “urge the younger women to love their husbands and children” (Titus 2:3, 4). This can help mothers keep a proper focus and leave a greater legacy than they might realize.

Dr. Candace Wood is a freelance writer in Charlottesville, Virginia. 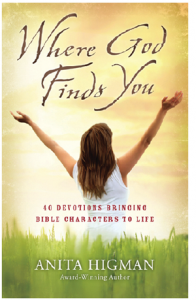 From Where God Finds You

I folded the strips of coarse linen cloth that would soon wrap and swaddle my baby. With lilting fingers I stroked my womb and the child inside me, growing and blossoming like the rose of Sharon.

This precious son of mine would be given the name John. He would be and already was the song of my heart. God had given me joy. Once I was barren, and now I was with child. He had removed my disgrace and replaced it with honor. My name, Elizabeth, means “God’s promise,” and surely the Almighty keeps his word!

As I finished folding the clothing and was thinking on all these things, I heard a knock at my door. On opening it, I saw my kinswoman Mary. She entered with joyfulness in her countenance.

At Mary’s greeting, the baby leaped inside me, and a holy knowing filled my body. I embraced Mary and welcomed her with a holy kiss. Tears of joy streamed down my face. As if standing in a rain from Heaven, I felt drenched in light and joy and laughter. I had never felt so uplifted in spirit, so blessed by God.

Feeling deeply awed and divinely inspired, I exclaimed, “Blessed are you among women, and blessed is the child you will bear! But why am I so favored, that the mother of my Lord should come to me? As soon as the sound of your greeting reached my ears, the baby in my womb leaped for joy. Blessed is she who has believed that the Lord would fulfill his promises to her!”

Shepherding a Woman’s Heart: A New Model for Effective Ministry to Women

Fresh Elastic for Stretched Out Moms

The Other Woman in Your Marriage: Understanding a Mother’s Impact On Her Son and How It Affects His Marriage

Raising Kids Who Turn Out Right

The Grandparent Factor: Five Principles to Help You Make a Difference in the Life of Your Grandchild

Grandma, I Need Your Prayers: Blessing Your Grandchildren Through the Power of Prayer

by Quin Sherrer and Ruthanne Garlock

by Jan Stoop and Betty Southard

Previous StoryThe Lesson and Life — for May 19, 2013
Next StoryChanging the World Your Home