Some of the greatest inspirations in life are fueled by the stories of people who do ordinary things in extraordinary ways. In conversation with Joe Dudeck, owner of Joetography in Indianapolis, Indiana, it’s easy to be inspired. Dudeck started on a path walked by many. He acquired a good education, moved on to good jobs, and married a marvelous girl. But when a new job ended almost as quickly as it had begun, he stopped in his tracks.

After years of being successful in several marketing-related roles, Dudeck was surprised on the third day of a new job as he realized it was not going to be a good fit. The moment caused him to search for a new job with greater intention, becoming more selective in his next career move.

As he did consulting work, he thought back to his travels in Europe, and more specifically the photos he had taken during the trip. Several people had commented on them, even asking if they could purchase his photos.

Dudeck explains, “I hadn’t been trained in photography, but I enjoyed taking photos.” He notes with a laugh, “I was off taking pictures of weird stuff while the other people were on their tour.” The “weird stuff” translated into thought-provoking images that found beauty in brokenness. Green plants emerging from rusty cans. Deteriorating doors that seem to whisper the story of those who had 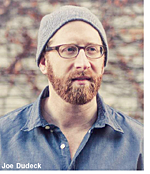 passed through them. Peeling paint on wrought iron that still held firm its crafter’s design.

He decided that photography could be more than a hobby, at least a nice creative outlet where he might make extra money. He enjoyed it and it grew from that place. Another moment that gave him pause on the journey was when he rebranded his website. “I wanted the site to give people a sense of who I am,” he says. “It caused me to examine who I want to be. How can I engage with people and share my own beliefs?” Dudeck begin building a good local network, taking opportunities to connect via social media. He says, “I knew I wanted to do more for the world and the local community than just take pictures for someone.”

This led to the Aperture Effect project, his plan “to use photography for good.” In 2012, Dudeck took 25 percent of two month’s proceeds and donated it to a nonprofit called Charity:Water (www.charitywater.org), an organization that helps bring clean, safe drinking water to people in developing nations. It was such a positive experience that in 2013 he decided to donate one photo shoot a month to a worthy person, group, or cause. Shoots have included work for the Make-a-Wish Foundation, TheraPets, the Leukemia and Lymphoma Society, and a recent graduate.

During a shoot for the Make-a-Wish Foundation, Dudeck thought, “This could be the last shoot for this person. It was an eye-opening experience.” And that could be true about any of his work. His hope is to create something for others, a moment in time that they can hold on to later.

His work naturally leads to new conversations and relationships. “I think in my upbringing, the Christian witnessing experience was unnecessarily complicated. What I’ve learned is that it can be real and organic. I just showcase what God has done for me and engage people personally. It’s cool to have opportunities through photography to tell others my story.”

In his online biography, he writes, “There’s beauty in order and disorder. I’m grateful to my God for both, and for the eyes to see it. I’m also forever thankful for my wife, Lindsay, who spurred me on to pursue photography. She’s always been my inspiration to notice and discover the world around me.”