For Ray Hilbert, Truth@Work cofounder and CEO, it seems all paths have been leading him to the one he is on right now. Fresh out of college, he had the opportunity to observe a faithful Christian business owner in action. He then went on to work for a large international company and witnessed firsthand the tough ethical conflicts Christians face at work, often encouraged to compromise values. Later Hilbert launched two businesses, experiencing the thrill of seeing one succeed and the heartbreak of watching another fail.

“The Lord blessed one business venture richly, which I’m thankful for, because it funded the one that failed badly,” says Hilbert. He explains that he lost everything on the failed business venture except his house and marriage. But the lessons he learned were invaluable.

Along with serving as a regional director with Promise Keepers for five years, all his experiences helped lead Hilbert to one conclusion: many Christians were struggling to understand how to live their faith at work.

He notes that churches sometimes post signs near their exits that read, “You are now entering the mission field.” But what does that look like when it comes to firing someone? Or how does it affect marketing practices? Helping business leaders answer these types of questions prompted Hilbert and Matt Peelen to launch Truth@Work in Indianapolis in 1998.

Now, 15 years later, Hilbert says one of the most exciting parts of Truth@Work is seeing its message growing into other markets. With chapters in 33 cities, it is staggering to see how God is working across the country. Through its multi-faceted approach, the organization strives to help “business leaders, entrepreneurs, CEOs, and executives be the gifted leaders God has created them to be.” Their support network includes various initiatives like seminars, roundtable discussion groups, programs, products, services, and a resource website (www.christiantablegroups.com). 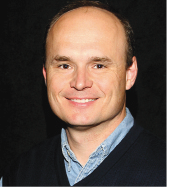 Five group models were designed to meet distinct needs of various leaders. In the Established Enterprise groups, leaders of large companies meet with their peers on a monthly basis. Similar groups are offered for both small business owners and company executives. Other church-based groups serve business leaders within the same congregation, while EDGE groups offer mentoring for emerging young Christian business and marketplace leaders.

Hilbert often hears stories about how these groups are making an impact. “I got a call from someone about a month ago who said, ‘I just want to tell you what Truth@Work means for me. I had a major problem I was facing and I didn’t know what to do in my business. I wanted to honor God, but didn’t know what he would want me to do. My monthly meeting was a couple of weeks away, but I pictured my roundtable group together. I could see and hear them giving me godly advice on how to make the tough decision.’ His Truth@Work group had become part of his thought process.”

The half-day “Purpose to Your Work” seminar helps individuals recognize why God created work. “So many believers view themselves as second-class Christians. All of us are called to do what we’re doing to God’s glory.” He shares that often marketplace Christians believe their role is simply to make money to support the work of the church and those in vocational ministry. But the truth is, we’re all the body.

“Sometimes, our traditional western church mindset is to bring people into an experience so they can encounter God. The church is to go to the people. Many ministers tell me they get so immersed in church business that they have little time to spend with unchurched people. In the workplace, we have an incredible mission field—a mission field on a sliver platter, if we’ll accept it.”

Learn more about Truth@Work or search for a chapter in your area at www.christianroundtablegroups.com.