As God transforms us, his light bursts through to all components of our daily lives, including our workplaces. This process often prompts individuals to question how their career ties in to the next stage of their faith journey. Some wonder if they are being called into vocational ministry or to make a difference through a nonprofit organization. Others find that God has planted them in the right spot, but they need to view their workplace through a new lens. Sometimes it is time to make a more dramatic shift.

Evan McBroom, creative director at Fishhook Communications in Carmel, Indiana, remembers a season when his life was compartmentalized into separate faith and work sections. 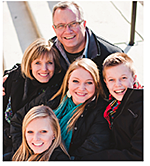 “If you had plotted my work and faith lines on a graph, they didn’t intersect,” shares Evan. Today, his faith and work are completely inseparable as he combines his God-given strengths and business talents to benefit others around the country.

It was through serving others that he began his own deeper commitment to following Christ. Evan was reaching out to meet needs in his local community by tutoring boys from the inner city. He says it was during that time that he moved to a greater level of devotion in his faith. Also he and his wife, Debbie, were connected to a local church and served on a regular basis.

In his career, Evan’s outgoing personality and knack for business made him a perfect match for his role at an expanding Indianapolis communications agency. He was in the sweet spot of truly loving his work and being good at it. During his 14 years there, he further developed his expertise and eventually accepted the role of general manager in 2001.

Around this same time, he began the Experiencing God study by Henry Blackaby and Claude King. Evan says he began to understand more about applying his gifts to his ministry work. “I began to serve more at church in my areas of strength, and I was feeling really alive in that.”

He sensed God prompting a change related to his job and says he went through a time of being restless. At one point, he discerned a calling to partner with God in a new way. Through prayer and conversations with his wife, he made the decision to leave his job in January 2003, taking a leap of faith to pursue God’s plan. At the time Evan had no job and no prospects but says that he and his wife were united in making the change.

He spent 40 hours a week trying to determine this new path, spending time in many conversations with friends and colleagues. Through the course of referrals, inquiries, and prayers, he found God’s plan is always perfect.

“I thought it would be one of three things,“ he notes. “I thought perhaps I was being called to attend seminary to become a teaching pastor, to work for a Christ-centered nonprofit, or to serve in communications or music in a local church.”

As it turns out, Evan’s inclinations were right, but not exactly in the way he expected. In a way he ended up doing all three things he initially was drawn to, yet God provided a creative twist to expand the impact beyond one local organization.

On the company’s website, he shares, “We’re called to be ‘fishers of men.’ The trouble is, the world is often out-fishing the church. My passion is to help churches and ministries be more effective at fishing by being more strategic in their communications. And, I have an entrepreneurial spirit and a ministry heart. This is the perfect place for me.”

He says the career transition affected his family in powerful ways too. There have been sacrifices along the way, but the result has been much closer relationships. “God is more tangible to all of us, especially my kids, because of the change.”

Previous StoryNot-So-Holy Holiday
Next StoryThe Lesson and Life — for April 27, 2014