I first became interested in joining the military after a friend shared with me his experience. His influence was encouraging, but I needed to find my own reasons to enlist. My reason came in September 2007. I remember watching a news story about the increase in monthly casualties and how this was negatively impacting recruitment; new enlistment numbers were at a historic low.

To be honest, the Army had everything I wanted in life—challenge, risk, and adventure—but until I saw that news report, I had made excuses for holding back: my family and friends, my comfort, and my life. One idea changed my perspective entirely—I realized that very few people were willing to participate in war or combat, and because no one else was willing, I knew that I must. Two days after I watched that news story, I walked into a recruiter’s office and began the process of enlisting. 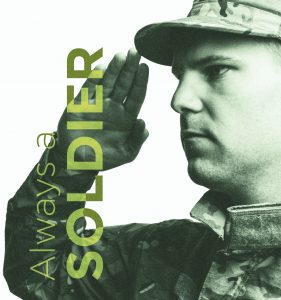 Even though I had the opportunity to sign up for a noncombat role, I chose to serve in the Airborne Infantry. From my perspective, serving in the military only to avoid combat was ridiculous. This decision changed my life in several ways. Combat training forced me to work hard under pressure. I took my role seriously and wanted to do my best, not for some overly patriotic reason but because I wanted to. What motivated me most was simply the opportunity to do well and to participate in something rare.

Anyone can do well when success is easy, but the test of personal achievement and courage comes when there is great risk. For me, Airborne School was the first time in my life where I experienced real fear. Airborne School is a course that teaches paratroopers how to jump out of a plane and land safely.

After two weeks of mock training, recruits are required to complete five jumps in order to graduate from the course and be Airborne certified. On my first jump, I was so nervous that I exited the plane very poorly and ended up having a parachute malfunction. I spun vertically and my parachute risers entangled around my legs and feet. My parachute opened, but I was upside down. I don’t remember my reaction, but I had to get out of that that situation. I had very little time before I landed, so I reached up to my feet and freed them from the risers. Moments latter I landed safely—in a thick of mud. I still had four jumps to go, so I had to brush off what just happened and try to do better on my next four jumps. I succeeded.

This was a great learning moment for me, because it forced me to overcome fear, and I am glad that I did. Jumping out of planes is still one of the single greatest experiences of my life; there is no feeling like it in the world.

After Airborne School, I received orders to Fort Richardson, Alaska. I remember thinking to myself, What in the world is in Alaska? The answer: a lot of mountains and snow. When I arrived I was assigned to the historic 1/501 Parachute Infantry Regiment, a unit that I am honored to have been a part of.

During my time in the 501st, I met a lot of good people and had some unforgettable experiences. One of my favorite stories to tell is about my friend Shane. He and I were roommates for a time while we were stationed in Alaska. Shane somehow got it in his head that he wanted to go ice fishing, so he bought a 3-foot-long, hand-cranked ice auger that he kept in our room. Eventually he got married and had to move out of the barracks. A few weeks after Shane had moved out, one of our sergeants walked into my room as Shane and I were hanging out. The sergeant looked down and saw the ice auger still there, and then he looked at Shane and said, “I told you to make sure all of your stuff was out of here.”

Without missing a beat, Shane replied, “Sergeant, I brought the ice auger in just in case we went fishing for PT (physical training) in the morning.”

The sergeant acted casual and said, “All right,” and walked out of the room.

At 0530 the next morning, Shane and I were in the room with a few other guys, and the sergeant returned with the ice auger strapped to a medical backboard. He told us that the entire platoon was going on a run, and the ice auger strapped to the backboard was coming with us. In the dark Alaskan morning, he took us on a 6-mile run in 5 inches of snow. Four men carried the backboard at a time (one on each corner), and people would switch out when someone got tired. Most of the guys were not happy about the run, but I loved seeing everyone together, running as a group, helping each other carry the backboard. What I miss most about the Army is the teamwork and friendship that came through ridiculous situations like this.

I became a Christian about the same time I was getting out of the Army. Three months before I would leave base for the last time, I was dropping off a friend at a bar, and while we were on the way, he told me that I looked depressed. I explained that life wasn’t going very well. At that time I was struggling with a lot of frustration, inner conflict, and a broken heart. He knew that I grew up in a Christian family, so he suggested that going to church would, perhaps, bring me some peace.

I had not been to church since I joined the Army, but I was persuaded, and the following morning we went out for breakfast and attended a local church. We slipped in the back just before service started, but in spite of knowing all the social cues, I wasn’t able to hide the fact that we were new. Of course, it didn’t help that my friend was hung over, and we both had the characteristic high and tight Army haircut.

Being in that church was a powerful experience. I realized that my life was filled with conflict, and I didn’t have the one thing I needed most—peace. I kept going back every week, and eventually I committed to following Christ and was baptized. I still find it ironic that it was my agonistic friend who brought me to church, but somehow that doesn’t surprise me in the least.

I’ve been out of the Army for nearly five years, and in some ways I’m a different person. I just graduated with a Bachelor of Arts in Biblical Studies, and my perspective on the world has matured. Even though time passes and my life continues to change, I know that deep down I will always be a soldier. No matter where I am—at the store, in church, or simply lying in my bed—my mind will drift, and I will remember what it was like.

It is early morning, 0629. Not a whisper can be heard. Every soldier is in rank and file formation. A calm cold silence carries over the base. The clock turns 0630. A canon fires and echoes off the mountains, reveille begins to play over a loudspeaker, and then the command, “Right . . . face!” Immediately every soldier turns toward the flagpole. “Present . . . arms!” And off in the distance a group of soldiers can be seen raising the flag of the Unites States of America. The song ends, the salutes go down, and the First Sergeant will say, “Platoon Sergeant, conduct PT.” At once, a great roar rises from out of the dark morning; thousands of soldiers chant in cadence, their voices carry across the great distance, blending into one, and echoing off of the mountains.

And even now, after time has long passed, I often catch myself dreaming and feel as though I am still there among them.

Jason Fry is a photographer and holds a BA from Cincinnati Christian University.

Previous StoryThe Lesson and Life for July 10, 2016
Next StoryA Deeper Appreciation of America