Homepage > Featured > Pressing on Toward the Goal
Print

Passion is a driving force and takes people to the ultimate limit of their abilities. Nick Goepper, first ever bronze medal winner in Olympic Slopestyle Skiing and three-time gold medalist at the X Games, pursued his passion from an early age. Nick began skiing at age 5 and spent his younger years learning and honing his skills at Perfect North Slopes in Lawrenceburg, Indiana. It is in no way a giant in the ski world. It is a small hill in Indiana that was the perfect place for a young boy to see what he could become as an athlete. Nick’s passion for anything fast or daring kept him trying new tricks, stunts, and maneuvers. He even created a course in his backyard so that he could practice after school. Doing things in such an unconventional way helped him become fearless and determined.

Nick grew up attending Bright Christian Church in the small town of Bright, Indiana. Although the town was small, the church was a growing force in the community and offered many opportunities for its youth to develop spiritually and reach out to others. The youth had the opportunity to go to Mountain Mission School in Grundy, Virginia, to help clean up the area and spend time visiting with other kids of like ages. Nick had the privilege of going on one of these trips. Trips like these help kids look past themselves to take on a servant role. 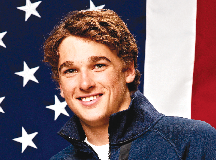 Learning these lessons through the leadership of Christian parents and the church spurred Nick to step up and help a friend in need. In 2014 Nick hosted the annual Winter Welcome Rail Jam held at Perfect North Slopes. All of the entry fees for this event were given to The Cure Starts Now, an organization that raises money for cancer research, specifically for DIPG, a rare form of brain cancer. This event was close to his heart because Lauren Hill, a fellow athlete and also neighbor from Lawrenceburg, Indiana, was suffering from this form of cancer.

Lauren was diagnosed with DIPG while she was playing basketball at Lawrenceburg High School. Her passion and desire was to play college basketball the following year at Mount Saint Joseph University in nearby Cincinnati, Ohio. Lauren’s other passion was to raise one million dollars for cancer research to help find a cure for DIPG. Nick hoped to help her accomplish that goal. Lauren realized her collegiate basketball dream on November 2, 2014. Cheered on by a sold-out crowd of 10,250 plus a television audience, Hill scored the first and last basket of the Mount’s 66-55 victory over Hiram College. Lauren lost her battle to cancer five months later. Through her efforts, $2.2 million dollars was raised for cancer research. One reporter stated, “Lauren made death a reason to live.”

What a profound statement. Didn’t Christ do just that for us? Christ made death a reason to live.

Last year I had the opportunity to be in a test study for a new product called The Finisher. It is a stand-alone table where you use handheld weights to exercise all parts of the upper body from the chest and arm area using the weights; you can work the legs and torso by doing lunges and squats at the same time. The Finisher was created to emulate the motions of finishing concrete in construction work. It is the brainchild of Merrill Hutchinson who has two boys in the military.

Merrill has raised his boys to enjoy the great outdoors and keep their bodies in shape to accomplish the many activities they enjoy doing. I’m sure that when the boys joined the service they had to work hard to get themselves in shape for the jobs they were to accomplish, but I guarantee that it was somewhat easier for them than for the guys who had just begun their physical training right before they entered. Merrill’s boys had made their diet and exercise a lifetime commitment. It wasn’t something they had to think too much about because it came second nature to them.

As Christians are we like the Hutchinson boys? Have we made the study of God’s Word, our prayer life, and our service our daily diet and exercise, or are we more like those just beginning to train for their first time in service? “Do you not know that in a race all the runners run, but only one gets the prize? Run in such a way as to get the prize” (1 Corinthians 9:24). Prepare. Be ready for whatever comes your way.

Every four years the Olympics challenges its contestants to push themselves to their ultimate physical and mental limits. They daily work to have their bodies be in perfect order. They train their minds to see all of the possibilities and aim to surpass them. Isn’t that what Christ wants from us as Christians? He wants us to offer our bodies daily as living sacrifices (Romans 12:1). He wants us to train our minds by reading his Word so that we can see all of the possibilities he has for us and be able to surpass them. He wants us to see beyond what’s right in front of us. He wants us to see the eternal and press on toward that goal.

Adolph Kiefer, who won a gold medal in the 1936 Olympics in the 100M backstroke, developed water ankle weights for resistance workouts. He was asked by the U.S. Navy to use these weights to teach the one skill most necessary for those in the Navy—swimming. Kiefer’s ankle weights were also used in training for competitive swimming and in water safety training for lifeguards as well as the Coast Guard. Adding weights to regular exercises makes the body work harder. Although they are a burden, the weights help those in training reach new levels of fitness and performance. Once the weights are shed, the swimmer feels lighter and performs in a more weightless manner, thus increasing their speed and agility.

Life can bring us burdens. We may experience job loss, bankruptcy, divorce, depression, anxiety, or many other troubles. No one enjoys those burdens, but by allowing God to come alongside and help us to bear them, we are allowing him to mold, refine, and perfect us over time. With perseverance we will come out prepared to finish our race. “Not only so, but we also glory in our sufferings, because we know that suffering produces perseverance” (Romans 5:3). Persevering teaches us how to share God’s love and compassion and reminds us that our race is eternal.

When I was a kid my grandfather had a large farm. I loved spending time there because I was a cul-de-sac kid and was enamored by the workings of the farm; it was foreign to what I was used to on a daily basis. On one visit my dad let me drive the tractor through the field as he stood on the back, holding on to my seat. He told me that when farmers are planting their fields they choose a goal in front of them and keep their sights on that goal. For me that day it was a fence post. He told me not to take my eyes off of that fence post. If I kept my eyes straight ahead on that particular spot, my seed rows would be nice and straight. He said, “Do not look back to see where you’ve been, but look straight ahead to where you are going.” Nick Goepper has said that he envisions God right by his side as he strives to achieve his goals, and that helps him give his best. Hebrews 12:2 tells us to fix “our eyes on Jesus, the pioneer and perfecter of faith. For the joy set before him he endured the cross, scorning its shame, and sat down at the right hand of the throne of God.” What are our eyes set on? What are our goals as Christians?

Each Olympic season will bring new contestants with their own passions to succeed and excel, yet each one must be prepared and must persevere if they want to win. As Christians, will our passions be fixed on Jesus? Will we be prepared for the plans God has for us? Will we persevere toward eternal goals?

Geri Lieb Benter is a freelance writer and church secretary in Indiana. She and her husband, Donny, have a son, daughter, and son-in-law.

Photos used with permission of Nick Goepper and NBC.