My mother, Katherine Redford, passed away suddenly in December of 2015 at the age of 94. Mom had problems with her hearing as she grew older, but she was remarkably spry for someone her age. She could still go up and down the stairs in her home and could reach down and pick up something off the floor with little effort.

Mom and I grew very close over the years. I’m much like her in temperament and personality, and in fact we share similar facial features. We enjoyed similar hobbies: doing crossword puzzles and playing Upwords, in particular. For several years I took a long weekend during the summer and drove several hours to visit her. No one else came with me. Mom and I did not do very much during my visit other than spend time on the aforementioned hobbies. Usually I preached at my home church on Sunday of the weekend, which Mom (and I) greatly enjoyed.

Mother’s Day last year was my first without Mom after 63 years. It was customary every year for me to buy a card and send that to Mom and then call her on Mother’s Day, unless my wife and I happened to be visiting her that day. Last year as Mother’s Day drew near, I looked at some of the Mother’s Day cards in the stores out of habit. Many of them described Mom quite well. But they stayed in the rack for someone else to purchase.

To say that Mom was a saver, a keeper of things, is a huge understatement. Much of this habit can be attributed to her growing up during the Great Depression and learning to save anything and everything. Nothing was wasted. If there was even the slightest chance that something could be used sometime, then it had to be kept. You never knew when it might come in handy. 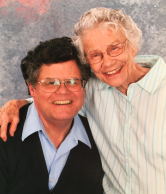 When members of our family went through Mom’s house after her death, we found numerous boxes and drawers full of pictures that she kept—many with nothing on them to identify who they were. There were also countless newspaper articles. Any time my older sister, younger brother, or I were mentioned in the paper for anything (the school honor roll, athletic accomplishments, etc.), she clipped the item and kept it. We also found old wedding invitations, funeral remembrances, bank statements, birthday cards, and jewelry that she had kept over the years. In the basement were shelves full of empty canning jars. That is only scratching the surface.

Most important of all, Mom kept the faith. The psalmist wrote, “My heart is set on keeping your decrees to the very end” (Psalm 119:112). That describes Mom’s heart. She attended church regularly and faithfully up until her death, getting a ride from my brother-in-law after she was no longer able to drive. People recognized her as a person of consistent, genuine faith. Mom passed that faith on to each of us children and desired to do the same with her grandchildren and great-grandchildren.

Mom is not alone in the tradition of keepers. Hannah is introduced to us in the book of 1 Samuel as unable to have a child. So distressed was she that she prayed earnestly, fervently for a son. She vowed that if the Lord granted her one, she in turn would give him to the Lord’s service. Samuel was that son. What Eugene Peterson stated is likely true: Hannah’s getting her son was a happy day, but keeping her vow and giving him to the Lord was even happier.

Hannah’s involvement with Samuel did not end with dedicating him to the Lord and taking him to the tabernacle. “Each year his mother made him a little robe and took it to him when she went up with her husband to offer the annual sacrifice,” (1 Samuel 2:19). Hannah kept her son clothed, not only in a physical sense but likely clothed in prayer each day without fail. When the time came that Samuel was instructed by the high priest Eli to say, “Speak, Lord, for your servant is listening” (3:9), Samuel’s godly mother, though not around him on a regular basis, played a part in his readiness. He was prepared to hear God’s voice because he had a hearing aid in his mother—a woman who made a bold, daring vow and kept it.

Twice in Luke 2, a Greek word that means “kept” or “treasured” is used of Mary. In the first instance, Mary is contrasted with the shepherds of Bethlehem who “spread the word” about the special child whose birth was so grandly announced to them (Luke 2:17). She, however, “kept all these things and pondered them in her heart” (v. 19, King James Version).

At the end of the same chapter, we read of what happened when Jesus was 12 years old and Joseph and Mary could not find him as they were returning from the Passover celebration in Jerusalem. After a three-day search, they discovered him in the temple, engaged in deep discussions with the learned men there. Jesus’ explanation of having to be “in my Father’s house” left both Mary and Joseph stymied (Luke 2:49, 50). Following the return to Nazareth, the record notes Jesus’ obedience to his parents and, once more, Mary “kept all these sayings in her heart (v. 51, KJV).

My mother could keep such items as newspaper clippings and pictures of her children. Nowadays technology provides other means of keeping and preserving. Mary had none of these resources; as a first-century Jewish girl in a remote town like Nazareth, how much would she have been able to even read or write? She did, however, have her heart. That was the sacred space where she could record the events in her son’s upbringing and replay them, reflecting on them for as long as she desired. As was the case with a later Mary in another small town, such moments could not be taken away from her (10:42).

Herein lies the key to what distinguishes these keeping mothers like Hannah, like Mary, like my mom. It is the way they maintain their inner beauty, what Peter describes as “the unfading beauty of a gentle and quiet spirit” (1 Peter 3:4). In the words of Proverbs 4:23, such women keep the heart for “everything you do flows from it.” Such keepers are, in truth, the most selfless individuals one will ever encounter.

As we went through everything in Mom’s house, the most important discovery was the Bibles she had kept and used through the years. There were a couple of old King James Versions, in which she kept bookmarks, newspaper clippings, and small pieces of paper on which she had written Scripture references, perhaps taking notes from a Sunday school class or a sermon.

In later years, Mom acquired the more detailed study Bibles, with footnotes and various helps included. Those too bore the signs of much usage. I was reminded of the saying, “A Bible that’s falling apart usually belongs to someone who isn’t.” I was also reminded that keeping mothers like Hannah, Mary, or my mom, are the ones who have the most to give to others.