Homepage > Featured > The Only Name That Matters
Print

I was always defensive about that name.

When we started a church in Cincinnati’s urban core 12 years ago, our leadership group quickly settled on the name Echo to illustrate our desire to resonate the Word of God. Yet we also wanted the name to reflect our affiliation with the Restoration Movement. Unfortunately certain realities worked against us.

Echo Christian Church was eliminated as an option because we originally met in a Disciples of Christ church building—that church’s theology was far more progressive than ours, and their church name included Christian Church. We didn’t want confusion. Neither could we call it Echo Church of Christ, as just a few blocks from us, the Cincinnati Church of Christ was started; some in the neighborhood were still suspicious about that congregation because it was affiliated with the International Church of Christ, so we wanted to avoid any negative connotation there. We couldn’t even use the Christ’s Church moniker, as that’s the name of the central Episcopal Church downtown. So we simply called ourselves Echo Church.

When describing our church’s name to others in the Restoration Movement, I felt the need to defend our name. I’d offer the above explanation as to why our name didn’t identify with the thousands of fellow churches across the world that pursue New Testament Christianity.

But I discovered that no one I talked to, even those with deep roots in our movement, seemed to care. At first I credited my detailed explanation for diffusing the controversy. Yet eventually I realized that their indifference had a different source: they no longer cared about the Restoration Movement.

We shouldn’t be surprised. Even though the Restoration Movement adopted certain denominational characteristics, our loose affiliation has been difficult to keep together. Yet those who care deeply about our churches must ask why our people, especially our younger leaders, are no longer passionate about the movement. Allow me to offer three reasons why.

The book of Acts doesn’t display a perfect church; even the apostles quarreled among each other about the best path forward. In the same vein, the early years of the Restoration Movement featured some fantastic debates about theological issues like baptism and communion. Yet from the late 1800s into the 20th century, intense theological arguments began to fracture our movement as certain pockets embraced biblical liberalism. Fortunately, guardians emerged who wrote and spoke out against this trend.

Yet in subsequent years, after the dust had settled from the liberal assault, the quarreling continued. It was as if arguing over theology had become one of the tenets of our movement. The fear of liberalism incited a witch hunt, with new generations (claiming to walk in the footsteps of previous guardians) drawing distinct lines over topics that were insignificant or ambiguous. Personal attacks toward Bible college faculty and megachurch ministers became commonplace. The negativity was, and is, overwhelming. And who wants to associate with a unity movement that prides itself on exclusion?

To be fair, these kind of conflicts are visible in nearly every denomination, as church leaders project a vision for the future. But since the Restoration Movement has no hierarchy or headquarters to facilitate the conversations, disagreements can continue on for years. In too many arguments we lost the “in all things love” component of our plea, and the negativity led some to opt out of our fellowship altogether.

Each week I’m in different churches speaking with our movement’s key leaders. In these conversations I often ask how familiar their church is with our brotherhood. Most respond that the vast majority of their church members simply have no idea what the Restoration Movement is.

Sure, this unfamiliarity could be attributed to a fading respect for our past; when I was growing up, our church would take at least one Sunday during the year to highlight the history of our churches. Today few churches are willing to devote any valuable preaching opportunities for such a history lesson.

But rather than lament or assess blame for this lack of emphasis, perhaps we can view it as a positive. Our movement’s focus on New Testament Christianity and biblical essentials was never intended to create a denomination or emphasize anything above the Scriptures. An illustration of this: another description of our churches is the Stone-Campbell Movement—a reference to early movement fathers Barton Stone and Thomas and Alexander Campbell. Yet some in our churches are highly offended by that name, as it emphasizes the individuals who helped spread the movement rather than the biblical ideals they sought to champion. Although the two aren’t mutually exclusive, I think we’d all prefer that the people in the pews have a more robust knowledge of the Bible than of our movement’s history.

The most compelling reason why the Restoration Movement is no longer as popular as it once was is that our plea won. The majority of evangelical Christians now generally accept the theological values of our movement. 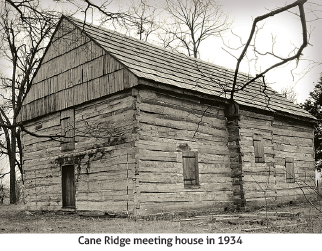 The earliest roots of our movement were planted before the American Revolution. During this time, reformed theology (Calvinism) encompassed nearly all of American Christianity. Almost every local church was aligned with a denomination. Few churches practiced adult baptism by immersion. This is why our movement’s founders called for a return to biblical Christianity. Centuries later, our plea has become the norm.

Some of the fastest growing churches in the world are non-denominational, independent churches. Examine any of these non-Restoration Movement congregations and you’ll be hard pressed to distinguish between them and us; they believe in the authority of the Bible; they hold congregational autonomy; they baptize by immersion; they offer weekly communion; they don’t claim to be the only Christians but aim to be Christians only. It sounds counterintuitive, but the “decline” of our movement is something we should take pride in. Denominationalism is dying, and people are longing to be in churches where the Bible is the authority.

Why It Still Matters

So if our movement’s ideals actually won out, is it something that fulfilled its original purpose and ought to give way to new movements? I don’t believe so. In fact, I see three reasons why we should still care about the Restoration Movement.

We need this biblical faith.

In my decades of study of church movements (both historical and contemporary), I’ve discovered no other that more succinctly aligns with biblical Christianity than our own. While other movements practiced similar traditions throughout the centuries, we source the Bible to validate them. In ever-changing times, we must continue to fellowship with Christians who hold to similar beliefs, for both accountability and encouragement. While our movement’s theology isn’t flawless, its roots are buried in the Bible.

We need this distinct fraternization.

Even though our congregations are autonomous, we’ve been able to accomplish some amazing things when we combine resources. Our churches collaborate to send missionaries across the globe, fund institutions for ministry education, and care for the least among us. As the American culture of independence can distract us from the power of unity, we mustn’t neglect to see the strength we have when we work together.

We need an ever-expanding family.

I remember the end of last century when it was announced that the independent Christian churches/churches of Christ were one of the fastest growing movements in the U.S. This was both a source of pride and a powerful statement about the growth of the kingdom of God. While churches throughout the world have adopted our plea, we struggle to bring them into our fold. Perhaps the greatest obstacle of the future of the Restoration Movement is that we stopped inviting churches to join our family. Outside of new church planting, there is no real path to induct a church into our fellowship. I imagine a future where we once again create opportunities for those longing to be Christians only to join our movement and embrace the liberating fellowship we have.

Perhaps I’m just a romantic with an unhealthy appreciation of the past, but I absolutely love the Restoration Movement. Despite the ebb and flow of passion surrounding our fellowship, it’s a family unlike any other, embracing the Scriptures and boldly exalting the name of Jesus.

As we’ve displayed throughout our history, his is the only name that truly matters.

Previous StoryIn The World—July 2, 2017
Next StoryMaking the Most of Your Age and Stage