Last year Americans paid more than $400 million to be frightened. That is the estimated 2012 U.S. ticket sales of movies in the horror genre. Whether you like to watch scary films or not, most of us approach fear differently when it is very real and threatening our own lives.

Fear takes many forms: physical trauma involving a trip to the emergency room; a pink slip handed out by Human Resources; or doubt creeping up in the darkness of night, whispering “What if you fail?” “What if the worst happens?” and “What if you end up all alone?”

When fear threatens to overwhelm our minds and emotions, we should be reminded that there is a way out. Although we serve an unseen God, he promises to be “our refuge and strength, an ever-present help in trouble” (Psalm 46:1).

During fear-filled seasons of life, it is comforting to think of believers who face all kinds of fearful situations yet who continue to pursue the mission God has called them to. Here are two amazing families doing just that. 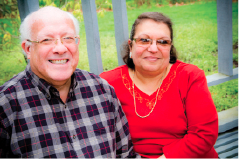 Safaa and Mona Fahmi’s lives are at risk in their home country of Egypt simply because they follow Jesus. Christians (just 10 percent of Egypt’s 85 million people) are considered infidels by the ruling Muslims.

The Fahmis explain: “Nowadays our main problem is that the Muslim Brotherhood took over the country, promising the people freedom and justice according to God’s laws written in the Koran (their holy book). But the people found out that they were after the authority, and that they never intended to give them either freedom or justice. During the one-year rule of the Muslim Brotherhood, we had a shortage of food, gas, and jobs; they also killed and imprisoned many of the people who protested against them.

“The Egyptians are a tough people; if they feel danger, they protest until they change the bad situation into a better one. Right now, even after we regained control of our country, [the Muslim Brotherhood] still thinks that it can regain its power by causing chaos all over the country—killing, burning, and attacking Christians who cannot fight back because they are the minority; and they know that Christians will never do the same to them.”

The Fahmis went on to say that in a one-month period last summer, 86 churches, 85 stores, 59 homes, 16 pharmacies, three hotels, and 89 vehicles owned by Christians were burned. Hundreds of females were captured for ransom.

But the Christians have not given up. “These attacks made Christians of all denominations unite in prayer for peace in the country. God is great. His plans are perfect, and his support is tremendous. He blesses, comforts, strengthens, shows fruits, enlightens minds and hearts, and covers us with his grace and love.” 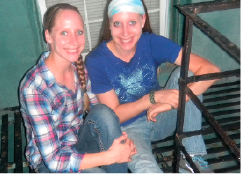 Jessica and Jennifer Polzin minister to a community they describe as “a poverty stricken neighborhood, full of loving and generous people, but encompassing many risks such as drug and alcohol abuse, prostitution, and violence.”

Having visited on several mission trips, the sisters moved to the inner city neighborhood of Lower Price Hill in Cincinnati after graduating from Crossroads College. Jessica and Jennifer not only have themselves to look out for, but they have also taken custody of children over the years. (They are currently raising two girls, ages 9 and 14.) Yet the same community that houses danger has also been their source of help.

For instance, one night neighbors warned the Polzins to take a different route home after church when gun shots fired a block away. On another day Jennifer stepped on an unseen needle while walking their dog. The local fire department gave her aid.

They also tell the story of the time Jessica was confronted by an intoxicated, violent woman. Rescue arrived from a surprising source: “The woman went into fight mode, cursing and getting ready to physically fight. Jessica kept stepping backward, trying to give herself time to think of a nonviolent plan to resolve the situation. Jessica felt someone wrap an arm around her to protect her. As she looked around, she became aware that one of the drug dealers on the corner had come to her aid.”

Jessica and Jennifer testify: “We continually find strength in God by looking back at the numerous ways that he has acted on our behalf in the past. It reassures us that he has never been absent from our lives and will not be in the time ahead. Even the challenging times prove to be part of his great plan. Through his Word, we gain wisdom and a perspective that is crucial in the midst of risky circumstances. When we rely on God’s power, he acts in ways that are beyond our comprehension!”

Fear can haunt us and paralyze us. Or fear can trigger us to flee to the one whose “perfect love drives out all fear” (1 John 4:18). The Fahmi family and the Polzin sisters have made their choices. Their reliance upon God in the face of fear and their desire to continue serving him in kingdom work is making a difference in the lives of others.

When fear strikes, what will you choose?

Kelly Carr is a freelancer, a mom, and a minister’s wife at Echo Church in Cincinnati, Ohio.

Previous StoryThe Gift of Listening
Next StoryThe Lesson and Life — for December 15, 2013