Alison Lorkowski says God prepared her for the journey she has been on over the past several years, but notes that the story is far from over. Years of weekly Bible study fueled the flame of Lorkowski’s love for the Lord and for Scripture. A self-professed marketplace evangelist, she is always on the lookout for the next door that God is opening, with the intent of helping people seek him.

She loves that the Bible speaks to all the major areas of life and wanted to help others catch on to the power of God’s Word. Several years ago she started a grassroots effort to help people from all walks of life begin combining biblical truth with their decision making in everyday life. She began inviting speakers to host workshops and seminars addressing timely topics like finance, nutrition, religious freedom, and even controversial topics like creation vs. evolution.

Held at Michigan’s Grosse Point War Memorial, all workshops presented subjects from a biblical worldview. Remembering the start of the endeavor she notes, “I was the least likely person to do this. I didn’t even know anyone.” Nevertheless, she connected with many people, took recommendations, and watched God open doors.

This part of her journey continued for about three years, and then there was a time of quiet pause. Lorkowski says she sensed God stirring something new within her. One evening as she drove down a street, she noticed the lights from televisions coming from many of the homes. The moment caused her to reflect on the power of this constant influence and its messages in our daily lives. The phrase “God bless America” came to mind as she focused on the need for a nationwide shift toward God.

She knew the phrase had to be paired with Scripture. The verse that fit came from 2 Chronicles 7:14: “If my people, who are called by my name, will humble themselves and pray and seek my face and turn from their wicked ways, then I will hear from heaven, and I will forgive their sin and will heal their land” (New King James Version). 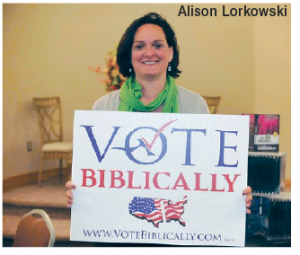 One day as she listened to a sermon at church during election time, the minister encouraged the congregation to “vote biblically.” This also struck a chord with Lorkowski.

She worked with a designer to create art that incorporated an American flag with a cross, displaying the message “Vote Biblically.” She purchased simple yard signs to spread the idea. She began by selling 10 signs, and then used the profits to purchase more. As demand increased, she was purchasing 50 at a time.

The signs helped to start conversations about what it meant to vote biblically. When asked, Lorkowski explains, “God answers every question about life in his Word. I encourage people to study and get connected to a good church. It’s about pointing them to the truth.”

As the popularity of the signs grew, she struggled with how to keep up with the demand from a financial perspective. “I knew I needed to order 500 signs. I thought, How am I going to get the money?” remembers Lorkowski. Through providential circumstances, she met a woman who was excited about the project and insisted on covering the cost of the signs.

She notes with enthusiasm, “There are a lot of doors that open up when you’re obedient to God.” For her, this was about following God’s lead and staking territory for him. Lorkowski also distributes “God Bless America” car stickers with Scripture in the hope of spreading this message in a simple way across the nation.

She clarifies, “This is not a Republican or a Democrat thing. It’s a God thing. I’m not political; I’m biblical.” The idea of voting biblically is one that she continues to share whenever doors open. Last May she had the opportunity to participate in the National Day of Prayer at the Capitol Building in Lansing, Michigan.

“As the body of Christ, we need to bring God back in our country. I’m just doing my part,” she states.

Previous StoryWhere You Live — for November 10, 2013
Next StoryBeyond the Nightly News: Venezuela