Homepage > Featured > Through the Lens
Print

Photographers Joe and Amanda Porter develop new art every day as they capture snapshots of radiant brides and tearful grooms. For those of us who get to experience those photos later, we can’t help but relive the moment and take part in their creative act. It might be a lump in our throat or tears in our eyes.

Joe and Amanda’s story has its own unique, beautiful snapshots:

Joe and Amanda first met after they became coworkers at a local Christian bookstore. Amidst the smell of paper, a friendship blossomed. Both were dating different people at the time. Amanda was engaged during her freshman year at college to a fellow student. But it all changed just five weeks before the wedding.

“We were freshmen and we were planning on getting married that summer between freshman and sophomore years. And then Joe came home from college—this was about five weeks before the wedding—and we started working again at the same bookstore. Something about him sort of bothered me—in a good way though,” she laughs. They started hanging out in accidental ways.

The two of them decided to attend an FFH concert with friends. Joe said, “A bunch of us were like, ‘Hey, let’s go.’ So I thought it was a group of people going, and it turns out the only two people who had tickets were me and Amanda. So we drove separate cars and met there.”

Both of them had a surprisingly great time and decided to grab some food after the show.

Amanda agreed. “Something about him really made me second guess the choice I was about to make. I think what really caused me to give him a closer look was that he reminded me so much of my dad. So for me to find a husband who was exactly like my father—that was just the best prize I could imagine.”

Joe had a profound choice to make. “I don’t think or plan very far in advance, so I just knew I liked her,” said Joe. But Amanda was considering what do about her future. “She asked me, ‘What are you going to do, Joe, if I break off the engagement?’”

He decided right then that he wanted to marry her. And he let her know he wasn’t going anywhere. So just a month before her wedding, she broke the engagement and officially started dating Joe. They got married in 2004. 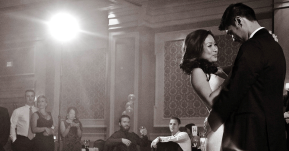 From early on, Amanda found her place as the stable one in the relationship. After graduation, she worked as a critical care nurse and continued to work as a nurse practitioner in psychiatry. Joe dabbled in a little bit of everything along the way.

“At one point I was a third-party collections worker, I worked at a bank, an investment advisor, did some real estate,” he said. Through it all he kept trying new things, risking again and again. Then, in the seemingly mundane moments in life, things began to change with a cheap digital camera.

“[Our son] Alexander was about 4 years old at the time. We’re trying to take pictures indoors and outside, and he’s never wanting to sit and look at the camera and smile really pretty like our daughter, Brooklyn, did. So it turned into constant action photography and we got a little frustrated with it. I got a little FujiFilm, a little better point and shoot to get better photos, and I liked it. It was fun.”

He took the FujiFilm and snapped some photos of a friend for senior photos for just 50 dollars. It turned out the pictures were pretty good.

“I think you should get a better camera,” Amanda told him.

“So we bought the cheapest DSLR camera that existed at the time at Best Buy on a credit card because we didn’t have any money to buy it,” said Joe. “I brought it to a friend’s wedding as a guest and just shot off to the side and messed around. No portraits or anything staged, but exactly how I’d shot Alex, kind of photojournalistic style.”

After the wedding, he showed Amanda a few of the pictures. “Those are really good! We should show these to people,” Amanda said.

“So we started up a free website and people started asking if we would shoot their weddings,” remembered Joe. In just a year they shot 52 weddings.

“The more we got into it, I realized my brain was really wired that way,” said Joe. “It started to come into focus where I had tried all these other things that were related to numbers and systems, and it never really worked well. I did a lot of sales things and I hated it and I didn’t think I was very good at it. And so I realized how fun photography was and how I was pretty decent at it. Other people thought so and were paying me money to do it.”

The name for their business came from Amanda while the two of them sipped hot coffee at Front Porch Coffee off Glenway Avenue in Cincinnati.

“She came up with the name Innovatory, which I wasn’t quite sure was a word—and it’s still kind of debatable.”

As Joe continued to shoot, he brought Amanda along. They loved being with each other, so they learned together. The business boomed and success came—the former real estate agent and the nurse practitioner each found themselves with a new job title—photographer. 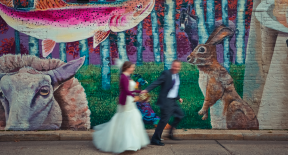 Despite what people might think when they see Innovatory photographs, Joe and Amanda weren’t always the creative people they are today.

“Nobody says ‘I wasn’t really born with the gene to love, I’m not really wired that way.’ But people do say that about creativity. Like somehow God messed up and didn’t make them creative. So I think coming from a Christian perspective, everyone has the ability to be creative. Usually what they mean is that ‘I don’t practice my creativity in the traditional way that we think of creativity.’”

“I was not a creative child,” said Amanda. “I was more of a follow-the-rules kind of person. I didn’t really stray very far from what was expected of me. The outside-the-box thing wasn’t me at all.”

Photography has given them a completely new perspective on life.

“I’ve had to give up what I think is attractive and open my mind to what might draw in someone else,” said Amanda.

“When you’re trying to create something, you’re not just creating for yourself,” said Joe. “I think whatever we create and produce, if it doesn’t resonate and connect with your audience, I don’t know what the value is. We should be producing things that are beautiful and valuable. If we’re not, it’s probably a waste of time and we’re not going to have a successful business.”

It’s deeply affected the way Joe views his other job at his church, Whitewater Crossing, as they work to reach out to unbelievers in Cincinnati.

The Future of Photography 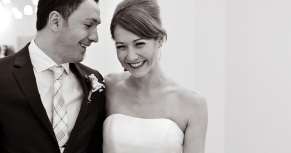 So Joe works on staff at the church and Amanda continues to work in the medical practice—all while growing Innovatory Photography.

“I still don’t know what I want to do when I grow up. Amanda and I have become really good business partners because she is a planner and detailed oriented and I’m a fly-by-the-seat of my pants kind of guy, taking the risks.”

There are lots of changes coming to their business, especially as they grow. But all along the way they’ve held firmly to the idea that in order to grow, they have to give back.

“I feel like if we’re faithful to do what we know God is asking us to do then maybe the thing that we think we want—it might come through; it might not. But we’re going to continue to be faithful. I’ve talked to a couple of people when they ask about our business and things succeeding. Without bragging—I can’t leave out that we’ve given to the church consistently.”

“I think we have to keep risking. I don’t think there’s such a thing as maintaining the status quo.”

Tim Sweetman is a freelance writer in Arnold, Maryland.