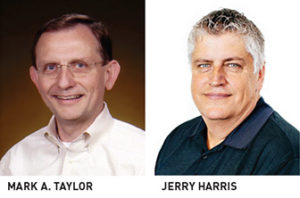 PARKER, CO—The president of Restoration Movement Media, Doug Crozier, along with its board is very pleased to announce the next chapter of leadership for Christian Standard Media. Jerry Harris, senior pastor of The Crossing based in Quincy, Illinois, has been named the new publisher of CHRISTIAN STANDARD and The Lookout magazines. He will serve in this role while continuing his leadership at The Crossing. The transition coincides with the retirement of the current publisher, Mark A. Taylor, on June 30, 2017.

“Mark Taylor has faithfully served in a variety of roles at Christian Standard Media, formerly Standard Publishing, for more than 40 years,” Crozier said. “He has been editor and publisher of CHRISTIAN STANDARD for 17 years. Most recently Mark has worked diligently to help move both CHRISTIAN STANDARD and The Lookout to new owners within the fellowship of Christian churches and churches of Christ, something that hasn’t existed for 62 years. Mark had postponed his retirement until the future of Christian Standard Media was certain. We appreciate his selfless service and wish him well as he enters a new chapter.”

The board of Restoration Movement Media began the search for a new publisher for Christian Standard Media immediately after Taylor announced his retirement plan. “As we scoured the nation looking for a dynamic leader, the name of Jerry Harris continually rose to the top,” Crozier said. “Jerry’s work at The Crossing is one of the great stories of our movement. The Crossing has 11 campuses in 4 states reaching over 7,800 people weekly and another 2,500 people online.

“CHRISTIAN STANDARD and The Lookout magazines are the treasures of our movement,” Harris said. “What a great privilege to lead them to serve the growth and health of our movement for years to come. I’m thankful for Mark’s leadership and for the trust the board of Restoration Movement Media has placed in me.”

Harris and Restoration Movement Media are currently searching for the right person to perform the editor’s duties at CHRISTIAN STANDARD magazine, and hope to announce that name soon.

Christian Standard Media will continue to serve readers through the two print magazines, their two websites ChristianStandard.com and LookoutMag.com, as well as their digital editions, available for CHRISTIAN STANDARD through a widely distributed app for phone or tablet.

The Solomon Foundation is one of the fastest growing church extension funds in America. When you invest with us, you not only get excellent rates but you make an eternal impact by providing funding for expansion and growth of the Independent Christian Churches and Churches of Christ. For more information, visit, thesolomonfoundation.org or call 855.873.5873.

Christian Standard Media is committed to continuing its 150-year tradition as a Christian mission-driven leader in providing resources for the church, beginning with CHRISTIAN STANDARD magazine published since 1866 with a devotion to New Testament Christianity. The Lookout magazine has followed in this tradition since 1894. For more information, visit ChristianStandardMedia.com, ChristianStandard.com, LookoutMag.com or call 800.543.1353.