It’s one of the most unattractive items in our kitchen, but we continue to use it. We have our reasons.

Soon to enter its fifth decade of service, the napkin holder was crafted (and I use the term loosely) in the mid 1960s from a bottle of dishwashing detergent. I was the craftsman. (I use that term loosely, too.) My shop was an eight-foot-long particleboard table in our church basement. The occasion was Vacation Bible School.

You guessed it. The dishwashing-detergent-bottle-turned-napkin-holder was a VBS craft project. Through the years, most of my VBS craft projects were discarded, lost forever to the enjoyment of mankind and the appreciation of fine art. But the napkin holder remains.

I owe its survival to my mom. And the fact that the napkin holder is a milky silhouette of my small hands folded in prayer. I’m sure you’re curious, so I’ll tell you how I made it. I placed my hands on either side of a plastic bottle while my teacher traced their outline. We left a little room for a base, and then I deftly cut away the excess plastic with a pair of safety scissors.

That’s all there was to it. As a kid, I wasn’t impressed with the finished product. It certainly wasn’t a wooden birdhouse or a hand-painted plaster of paris nativity set. But my mom loved it. So she held on to it after the rest of my VBS projects went into the trash. 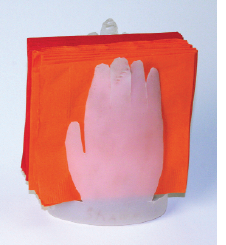 The praying hands napkin holder served our family well for many years. At some point, though, Mom replaced it with a store-bought napkin holder. But she couldn’t bring herself to pitch my masterpiece. So she tucked it away on the top shelf of a kitchen cabinet.

We came across it years later while cleaning my parents’ kitchen. My wife, Ree, seemed to take the same shine to it my mother did. So we brought it home and set it in our own kitchen where it continues to hold napkins for the McMullen family.

Most of the time we pull napkins from the plastic holder without a thought to its significance. But from time to time I’ll look at it and remember Vacation Bible School at my home church. I’ll remember craft time and the kind folks who helped us with our projects. I’ll remember snack time and our nightly ration of sandwich cookies and Kool-Aid—and the small bag of chips and glass bottle of Coca-Cola we received on the final night, year after year. I’ll remember singing songs about a little boy named David and a little man named Zacchaeus. And I’ll remember the faithful adults who gave up an entire week of evenings to teach me more about the love of Jesus.

My praying hands napkin holder didn’t win a design prize. And I doubt you’ll ever see it on Antiques Roadshow. But to me, it has lasting, time-tested value—much like Vacation Bible School itself.

Previous StoryTo Change a Life
Next StoryWhere You Live — for January 20, 2013