“Charlene needs to work with them like she needs to breathe.” A few years ago while we walked toward the Jesus Friendship Club classroom at Mount Pleasant Christian Church (MPCC) in Greenwood, Indiana, David Guthrie explained his wife’s passion to teach adults with disabilities.

A former administrator at RISE Learning Center in Indianapolis for 34 years, Charlene Guthrie learned early in life to care for those with disabilities. When she was 10, Uncle Mike, who had Down syndrome, came to live with her family. “He lived with us for 32 years because my grandfather died when Mike was 27. I grew up with him as another brother. . . . This has always been such a passion for me. I’ve always had God’s children to come back to when I couldn’t have the amount of children I wanted. They bring me such joy,” said Charlene.

Her vision for helping special needs adults expanded in early 2012 when she applied for Charlene’s Angels, Inc. to be a nonprofit 501(c)(3). Her mission is to offer respite for families whose adult children have special needs. When MPCC did not have space to house the weekday ministry, nearby Southland Community Church provided classrooms for these adults, ranging in age from 18-55. There the ministry has thrived.

Discipleship Minister Kerry Huffman enjoys having Charlene’s Angels as part of Southland’s ministry. “They teach us so much about what it means to love unconditionally, to accept people without question. They’ve been a representation of Christ to us like no one I’ve ever seen.”

Each week from Tuesday through Thursday, Charlene’s Angels begin their day at 8:30 a.m. with prayer and Bible study. They transition to functional academics like reading, time and money management, basic job training skills, and community habilitation, such as how to order meals and other basic communication. Later they spend 45 minutes exercising under the direction of retiree Larry Johnson who has volunteered since 2012. Charlene is impressed with their effort. “Some of our angels have even gone down a pants size.” Afternoons are often spent bowling or visiting local attractions, such as the zoo, orchards, and fire department.

February added a special memory for not only Charlene’s Angels but for more than 235 attendees from central Indiana. Joining more than 200 churches in 48 states and seven countries, on Friday, February 12, 2016, MPCC partnered with the Tim Tebow Foundation to host Night to Shine. This prom centered on God’s love for people with special needs, ages 16 and older. 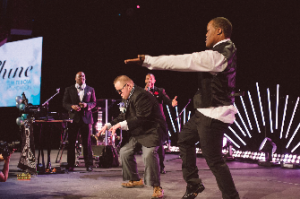 There were 32 of Charlene’s Angels and volunteers who attended. To prepare for the prom, the group practiced dancing. “We all just danced together. They’re quite entertaining, but no one ever makes fun of someone. They’re so kind to each other,” said Charlene. During the three-hour prom, 17-year-old Seth Crisler, son of David and Angela, perfected what his mother called “the autism shuffle.” Jimmy Musgrave, one of Charlene’s older participants, also enjoyed dancing with his fellow angel, Josie Tunis. “My favorite song to dance to was ‘Let It Go,’” said Jimmy. Also the attendees enjoyed their red carpet entrance.

MPCC’s senior pastor Chris Philbeck summarized the experience well. “In almost 36 years of serving the local church, I don’t think I’ve ever been a part of an event that brought so much pure joy to the lives of those who were being served as well as those who were serving. During the evening I was struck with the reality that this is it—this is the living, breathing, flesh-and-blood embodiment of Jesus’ example of pursuing, serving, and loving people—all people. I realized that as we were serving our guests, we were serving Jesus.”

The Crisler family—Jonathan (19), Seth and Anna (17), Daniel (14), and Reuben (9)—stays busy. While Anna is adopted, she and Seth look amazingly alike and both have autism. However Seth doesn’t attend public school like his sister. “Seth had a lot of anxiety about school because he’s so laid back, and sometimes schools can be chaotic and loud. He needed a more controlled environment,” said their mom, Angela. She also explained that in the special needs community, age doesn’t really matter, so some of Seth’s best friends are guys in their 50s.

In 2012 the Tunis family was looking for a church that had a special needs program, and they met Charlene. “I really feel like it was divine intervention,” said Jan Tunis. Her 24-year-old daughter Josie has always attended public schools since she started her formal education as the first Down syndrome child to attend kindergarten in their school system. Her senior year Josie was voted Prom Queen at Whiteland High School.

“Josie loves school and has become more outgoing since attending Charlene’s Angels. She now speaks in complete sentences. But mostly it’s about a sense of belonging. Now her life has purpose,” said Jan, who is grateful for Charlene’s Angels. “If I could just convey anything, it’s the love they feel being a part of this group. I feel Josie’s safe and loved here. It’s also important that it’s faith-based.”

Charlene’s Angels continues to evolve. The nonprofit hopes to purchase a 24-passenger van and expand its programming to more than double its current class of 20-25 special needs adults. They anticipate help through the Family Supports Waiver, which permits a state to furnish an array of services to Medicaid beneficiaries so they can live in the community and avoid institutionalization. 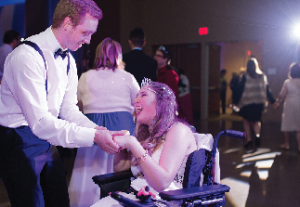 With these changes Mary Cox, Director of Administrative Support at Charlene’s Angels, may expand her current role. “But honestly, none of this feels like work because it’s a lot of fun,” said Mary. Teaching assistants Debbie Hoffman and Kathiejo Lawrence complete the paid staff. The board of directors includes Jack and Jan Tunis, along with other parents, Julie and Mike Donnell. Friend of the Guthries, Don Wilgus, formerly an IRS agent, is also a board member.

Grateful for Southland Community Church’s acceptance of hosting this ministry, Charlene noted: “The leadership here never says no. I’ve never felt such love, compassion, and support for our kids. They show a genuine interest in their lives. During one of their staff’s retreat days, they chose to take our angels bowling.”

Charlene’s eyes light up when she begins to talk about her angels. In her first class at RISE Learning Center, she remembers having David Donnell when he was 5 years old. His family moved away when he was a teenager, but David has returned to Indiana and, now in his 40s, is one of the adults Charlene teaches weekly. She also taught David Clodfelter, now 51, at RISE Learning Center when she first started in 1976. Charlene has become a second mother to him since his mother passed away in 2015.

Charlene serves adults with special needs as naturally as she breathes. She also notes how accepting they are of each other and how well they get along. “I feel so blessed each and every day to spend time with God’s precious children. It’s not a job. It’s a passion. We should all see each other through their eyes—without sin and pure.”

Joyce Long is a freelance writer in Greenwood, Indiana.

All photos from Night to Shine events across the country, courtesy of the Tim Tebow Foundation.