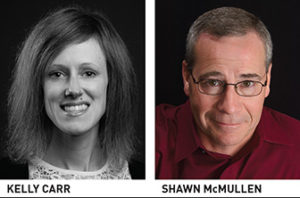 Shawn McMullen has been named the new editor of The Lookout. He will begin his tenure at the end of May.

Christian Standard Media’s new publisher, Jerry Harris, said, “We are so excited about having Shawn on the team. His leadership, pastoral, and editorial experience will serve this ministry so well. We are also so thankful for Kelly’s incredible work for the last four years. We will miss her greatly.”

Shawn is no stranger to this position. He previously served as editor of The Lookout from 2001 to 2013.

A graduate of Cincinnati Christian University, Shawn has led the small rural church, the mid-size suburban church, and the large urban multi-site church.

He was a founding member of the Energizing Smaller Churches Network and has edited and authored books on ministry in the smaller church. Most recently Shawn has served with the Center for Church Leadership in Cincinnati, Ohio.

Kelly Carr is stepping down as editor of The Lookout after serving in the position since 2013.

“I have been honored to lead at The Lookout,” said Kelly. “Serving as editor at such a historical publication is truly a stewardship, caring for a legacy in the Restoration Movement while striving to help others grow. God has taught me so much, and I am blessed to have worked with amazing coworkers and a team of great authors, as well as to have received support from faithful readers. It’s hard to step away from work I love, but I am grateful that it rests in good hands.”

Christian Standard Media is committed to continuing its 150-year tradition as a Christian mission-driven leader in providing resources for the church, beginning with CHRISTIAN STANDARD magazine published since 1866 with a devotion to New Testament Christianity. The Lookout magazine has followed in this tradition since 1894. For more information, visit ChristianStandardMedia.com, ChristianStandard.com, LookoutMag.com or call 800.543.1353.